Montreal has been growing continuously since the World Expo and the Olympic Games held in the 1960s and 1970s. However, the old city has been destroyed in the process. On the other hand, there is also a history of resistance to such modernization. In this series, Jin Motohashi, an architectural historian and staying in Montreal will report from Montreal on the city’s landscape, housing conditions, and relationship with the arts. The first one will start from the Atwater station.

Our first habitat with my family was a place near Atwater Station. On March 10, 2022, our Montreal life started with an unseasonably warm day. We found an apartment on Airbnb near my workplace, the Canadian Center of Architecture. That is just the reason to decide on this area for my residence. The province of Quebec, where Montreal is, is sometimes called the “The Paris of North America” due to its French-speaking nature and the cityscape of the historical city. However, when we arrived here in March, there was a sleepy atmosphere, like the city had not yet awakened from hibernation. There was dust from the construction of roads and high-rise buildings (After living there for half a year, I recognized that road construction is part of Montreal’s adorable character.).
At the Atwater station, I realized there was a large black building next to the crowded complex building. Two big steel beams overhung the roof outside the building. The outside, including these beams, was coloured black. What was this building? The only sign visible outside was the orange sign of A&W, a hamburger shop occupying the first floor. But I didn’t investigate that at the time. 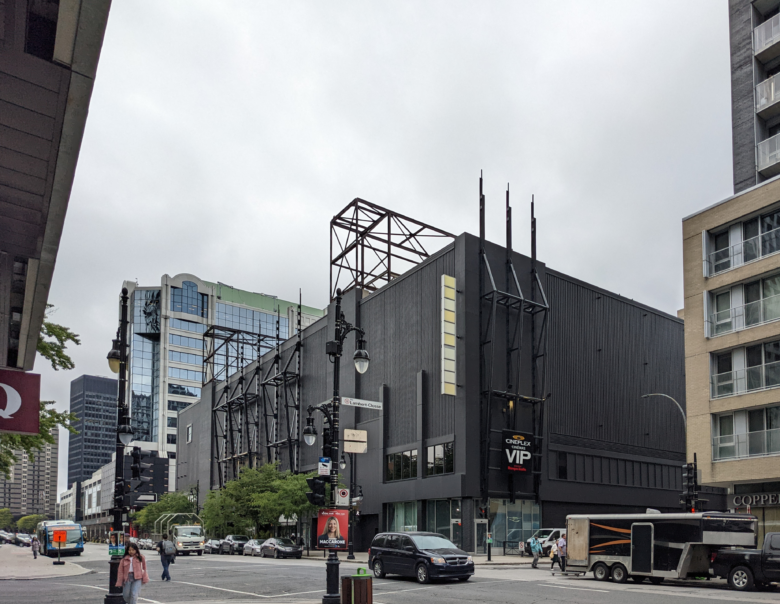 Black Box, built next to the Atwater station. 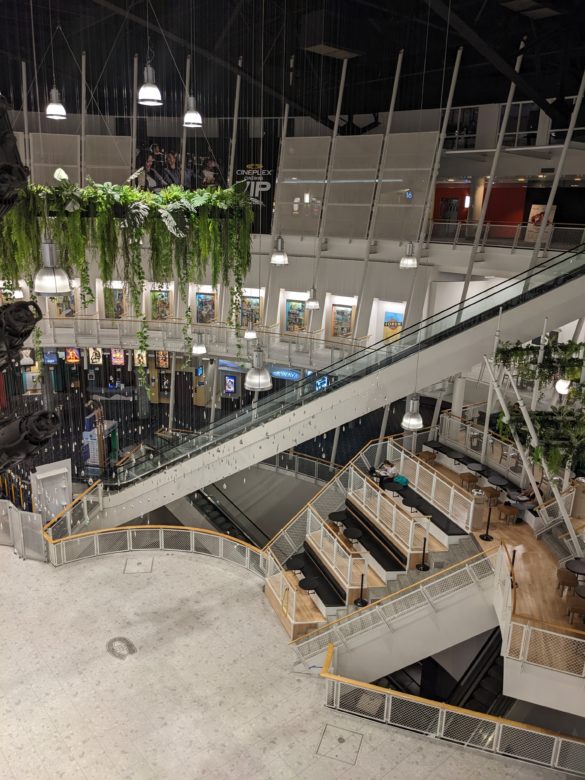 Sneaking into the black box, there was a large space.

“The atmosphere here in Atwater has changed a lot in these 20 years,” my colleague told me over lunch. His words solved the mystery of this black building. He told me it used to be an ice hockey rink. Moreover, it was the home rink of the famous Montreal Canadiens. Ice hockey is probably the most popular sport in Canada. The Canadiens are exceptional against the other clubs even today. This building was known as Montreal Forum; it opened in 1924 and was repeatedly remodelled and used not only for hockey but also for many different events, sports games, etc. The large structure, visible from the outside, was designed to materialize an ample space with no columns. 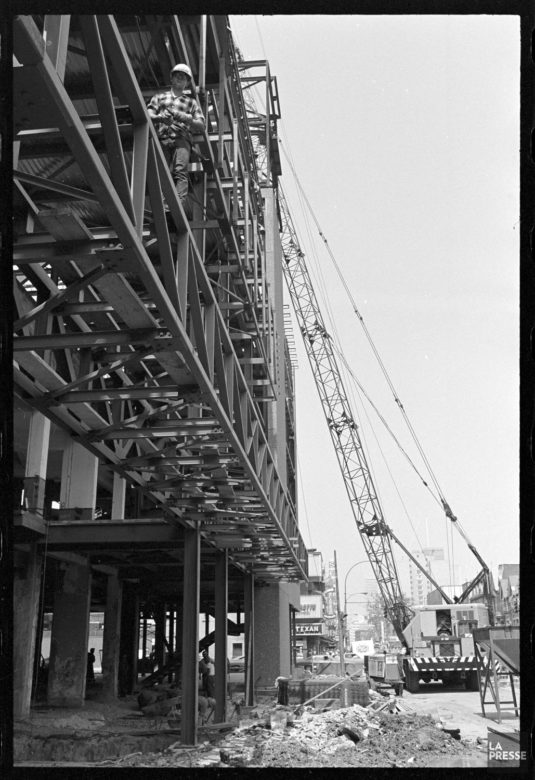 Montreal Forum has a familiar history to the Japanese collective memory because this was the hall where the gymnastics competition at the 1976 Montreal Olympic Games was held. Legends, such as Sawao Kato and Mitsuo Tsukahara participated in this event and won the gold medal in the team competition. Perhaps less important to the Japanese is the feat of Nadia Comaneci of Romania. She was the first in history to win threefold medals with a perfect score of 10 points! This black box has a great history. No matter what minor accidents happened in it, once we look deeply, we can find unexpected facts and connect them to our interests.

The Montreal Forum closed its doors in 1996. Canadians moved their home rink to the Bell Center near Central Station. It is easy to imagine that this place eventually lost its cohesive power. The remaining building was converted into a movie theatre, and a part of the rink was preserved. The black box carried Montreal’s history. “But the Atwater is changing again,” my colleague told me. At the site faced Montreal Forum, former buildings used for the hospitals were demolished, and a series of new high-rise apartment buildings are under construction in their place. Atwater will change again when construction is complete. 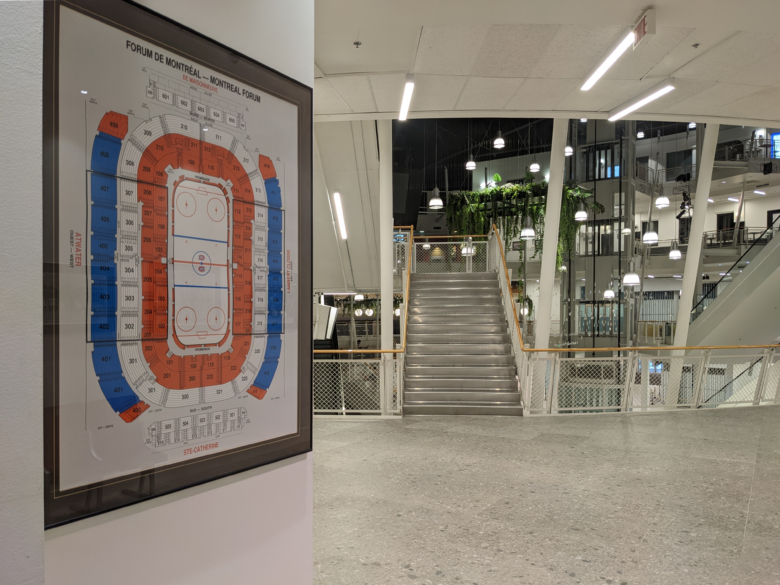 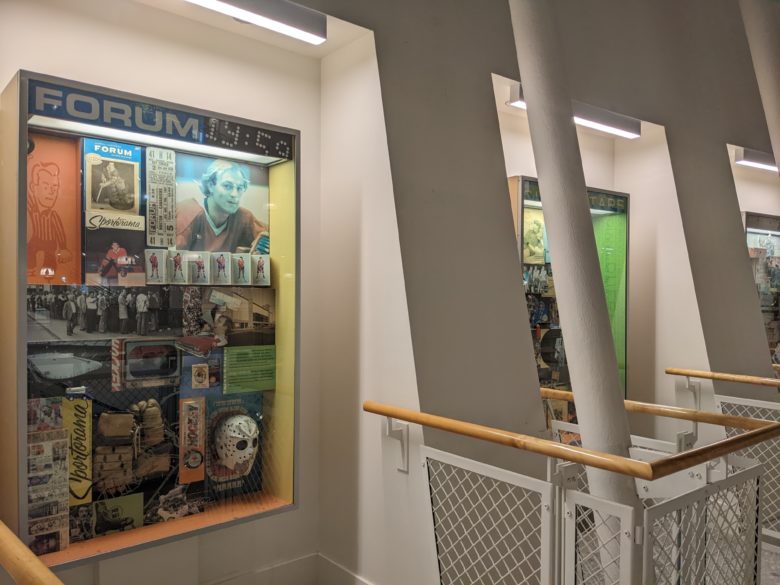 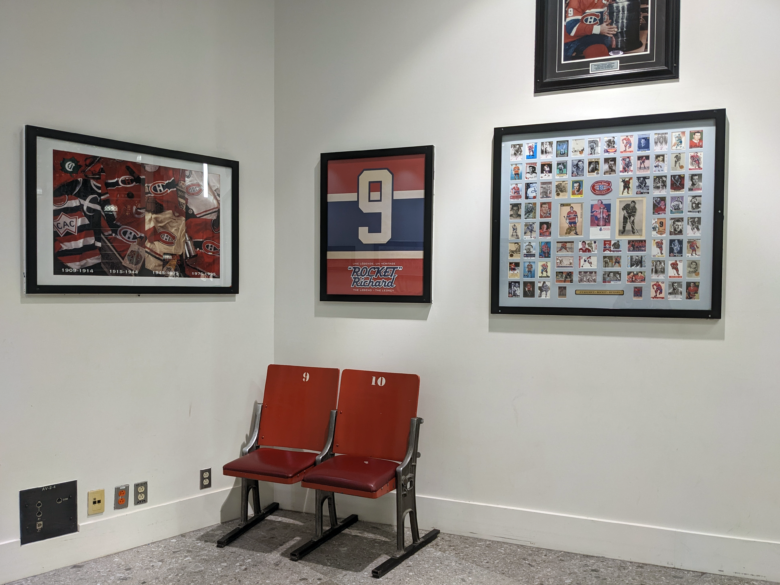 Numerous goods on display in various locations, remind us of the history of the Montreal Forum.

From a macroscopic view, Montreal is a historic city that retains an old atmosphere, but contrary to this image, the town has always changed microscopically. The site of a demolished old house taught me that.
I go to a supermarket called Supermarche PA. The prices are low, but the products are good. So, in the evening, the shop is crowded with many people who finish their work and go home. I noticed the tiny brick house beside the store was being demolished. It is not rare to see demolition sites here, but when I saw the other one had been left losing its brick partner, the scene overlapped with a memory I had from Kyoto. 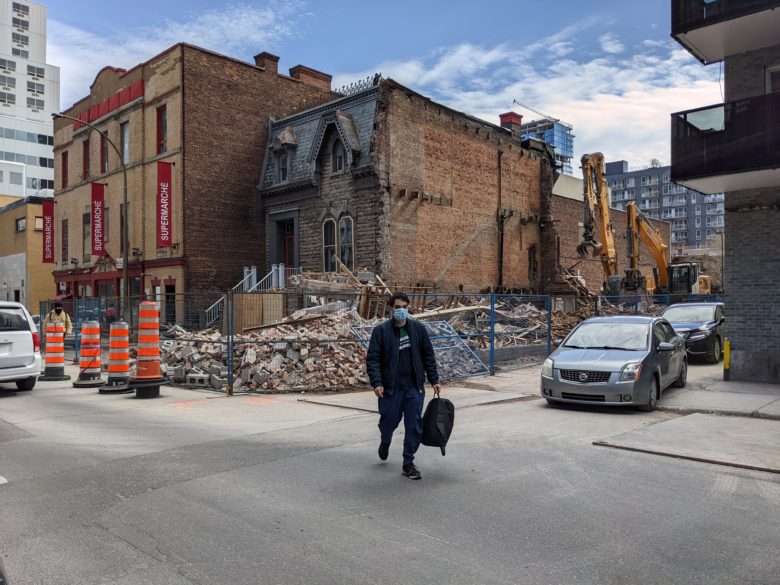 An architectural demolition site that I suddenly came across in the city of Montreal.
As an author who has studied bricks, it is interesting in many aspects.

Before coming here, I was in Kyoto for five years. In Kyoto, townhouses, called machiya in Japanese, are being torn down at about 800 per year. In anticipation of inbound visitors, developers are demolishing machiya to build new hotels. Machiya have been demolished for the people who expect to see the historical town. It is not uncommon to see the machiya just starting to be demolished and cars carrying materials from it. Whenever I encountered this situation, I resented myself for not doing anything. As an architectural historian, I am angry about this. On the other hand, I tell myself that they cannot escape the economic logic. 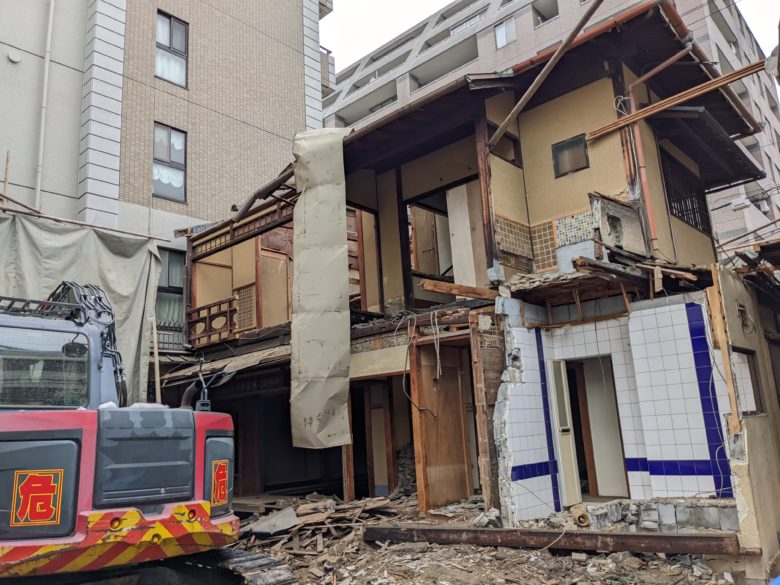 On the other hand, this is a demolition site I encountered in Kyoto.
It was a beautiful Machiya, but this is an unavoidable reality.

Montreal must be no different. Over there, from the window, I can see several groups of skyscrapers. Montreal, which is on the other side of the world from Japan, is not so different from Kyoto. Both ancient cities are constantly changing. The slow flow of time and the fast flow of time coexist in one city. 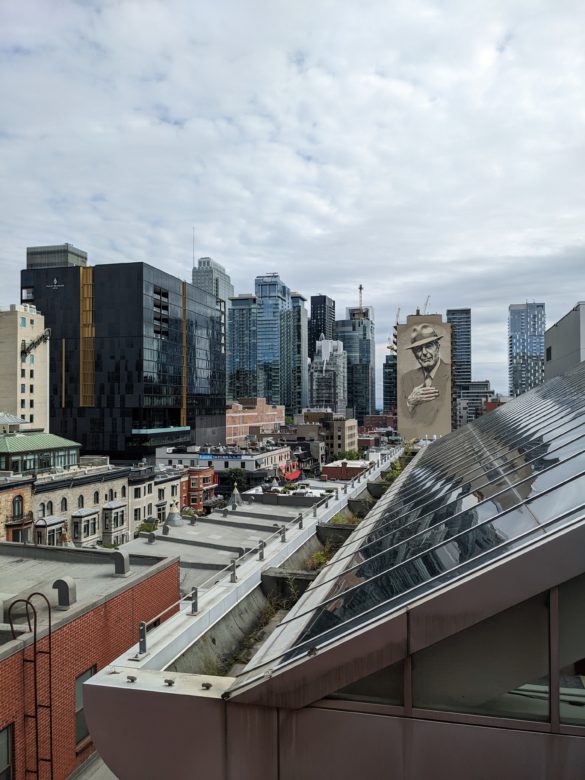 View of downtown from the Montreal Museum of Fine Arts.
Beyond the low-rise cityscape, an ever-increasing number of high-rise buildings still stand.

To Start a Series

“Living” is different from “travelling.” We can find even small things and feel the changes at the same site for a whole year. I am a beginner regarding Montreal, but I am sure the city will change even in one year. Since I came to Montreal, I have often found myself getting curious about the city even though it is not related to my research. This curiosity makes me scurry around, and my neck is already aching. If I have this aching continuously, I should use it to tell others about my experiences. So, I decided to take on this series out of greed. Let me say first that this series may sometimes lack context. I am still determining this series’ ending.
Spending time here in spring, summer, and fall, the image I have of this city has already changed drastically. The city of Montreal, although not so large, gives a very different impression depending on the season. Winter temperatures can reach minus 20 degrees Celsius, and summer temperatures can exceed 30 degrees Celsius. The difference of 50 degrees in temperature gives a sadistic sense of seasonality.

In Japan, cherry blossoms in full bloom tell us about the arrival of spring. If we don’t see it, we cannot get into the mood for spring. One day, I found out that there was a place to see cherry blossoms in Montreal. Soon, I realized that this was a good season for it in Montreal. My family of three went to the botanical garden as if we were having a picnic, and we had some rice balls. As I was enjoying my rice balls, I suddenly felt that this Japanese garden was “professional”…I will start this series with a story about this Japanese garden and Montreal’s city history. 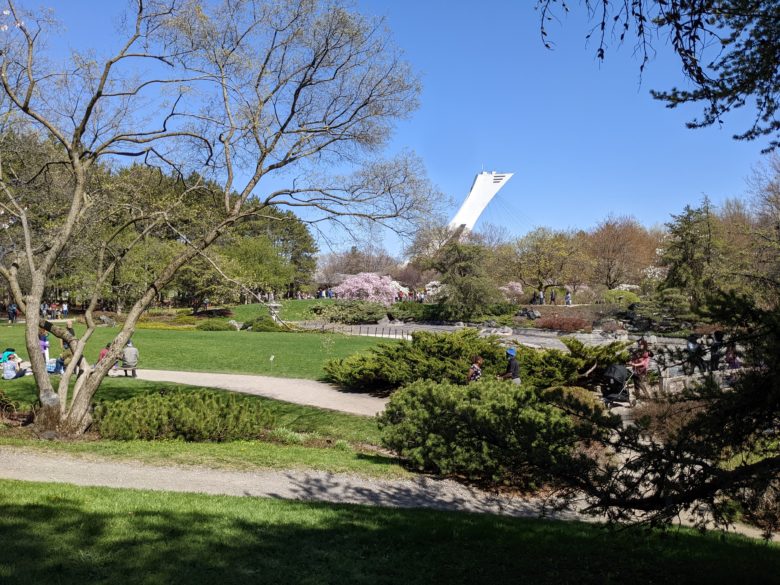 *All photos were taken by the author unless otherwise noted.